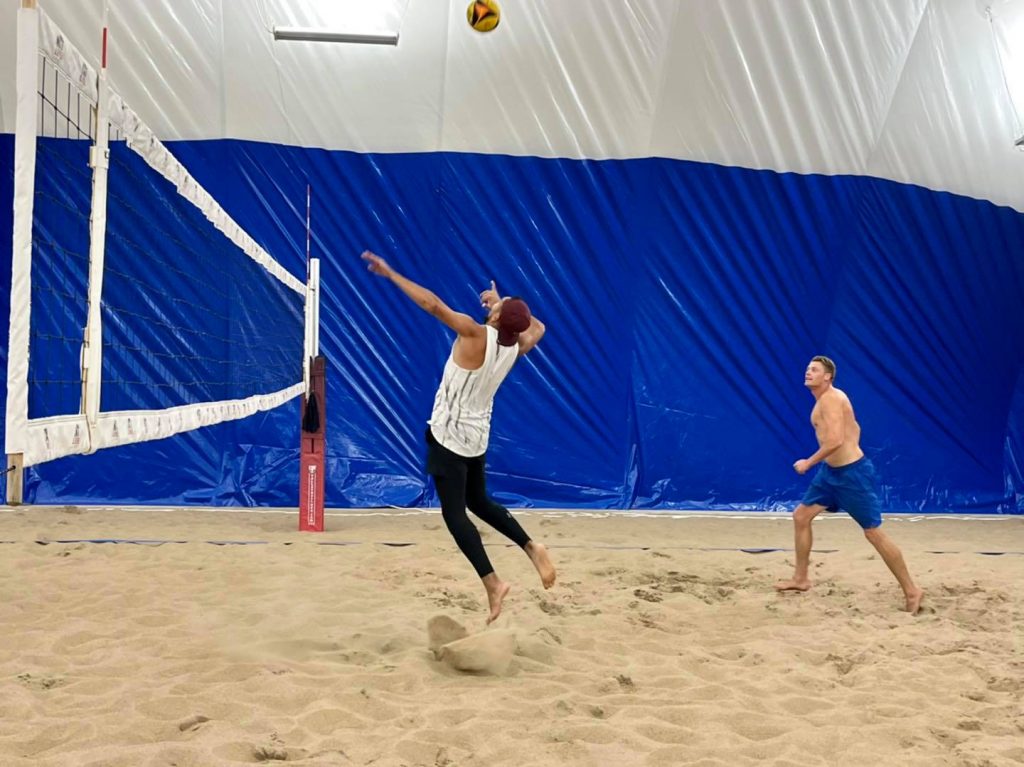 Every move in beach volleyball is essential. But there is one many people struggle to perfect, and that’s the hit. Why is hitting so important? Because it’s the main way to score points in a game, and a powerful hit can leave the other team scrambling.

Volleyball Beach answers the most frequently asked questions about hitting in beach volleyball.

What is hitting in beach volleyball?

A hit, also called a spike, is when a player slams the ball with their dominant hand over the net onto the opponent’s side. Hits are usually powerful and well-aimed in hopes that the ball will either land in the opponent’s court without being touched or making it too hard for the other team to return it.

It is the third step in the phrase “pass, set, spike,” which refers to how the ball comes to your side of the court. The first player passes it to the setter, the setter sets the ball up, and then the hitter comes in and slams it to the other side.

Why is hitting important?

While every move a team makes is essential, a good hit can ensure that the opponent can’t pass the ball back over the net, resulting in a point. When one team gets the ball over without a hit, it can also make it easier for the opposing team to set up a successful hit back at them.

There are several hitting terms in volleyball that are important to know to help you make sense of the game.

Some common ones include:

A bump is a two-armed pass and usually the first move a team makes when the ball enters their court. The bump usually aims to steady the ball for the setter to set.

A set is typically the second move after the ball enters a team’s side of the court. The first player passes the ball to the setter, who sets it by positioning it high enough for the hitter to spike it over the net.

A spike is another common term for a hit, especially a powerful, downward one.

An attack is when a team member uses the third hit to send the ball over the net back to the other team. It does not necessarily mean a spike, but it can be any method used to send it over.

An approach is the three steps you take before you jump up to position yourself to hit the ball.

A kill is a spike that hits the ground without the other team’s players touching it. It can also refer to a spike that a player touches but is unable to pass successfully.

How do you perform an approach when hitting?

An approach is the proper footwork before spiking the ball. It typically consists of three quick steps and a jump. For a right-handed person, the approach would be one long step with the left leg, then planting your right foot, then your left foot firmly, and jumping straight up. For right-handers, it is typically left-right-left, and for left-handers, it is right-left-right.

For sand volleyball, the approach can be different than on a hard court because, with sand, it may take a few extra steps to get the right placement. If you are playing two vs. two on a sand volleyball court, the team member who passes will also have to be the one who runs forward to perform the spike, which has to be done quickly.

If you are looking for competitive sand volleyball leagues or just a great place to hang out with friends, come to Volleyball Beach in Ozark, Missouri! Our indoor sand volleyball courts are open year-round, and you can stay and enjoy delicious food, drinks, and occasional live music on our beautiful patio.
For more information about sand volleyball, sponsored or corporate events, leagues, or tournaments, visit us in person,  contact us online, or call us at 417-771-9330.